Moonshine Over Brooklyn: Drink Up!

Micro-distilling is alive and well again in NYC! New York used to be the home to hundreds of distilleries, as well as wineries and brewers pre-Prohibition. During Prohibition the industry was wiped out in the City and while we’ve seen brewers and wineries starting to appear, there was a high hurdle for distillers.

That is until 2002, when New York State amended the successful 1976 farm winery law to cover small-scale distillers, provided they purchase half their ingredients from NY State farmers. There are now about 10 distillers in NYC, mainly in Brooklyn as well as The Bronx.

King’s County Distillery was founded in 2010 and resides at the Brooklyn Navy Yard, now a small industrial complex in the Vinegar Hill section of Brooklyn. Housed in site’s former Paymaster building, it is the first distillery to open in NYC since the end of Prohibition. The distillery has tours every Saturday afternoon.

It’s fascinating to see a small-batch distiller here in the heart of NYC. Standing in the middle of the distillery are two large copper stills, manufactured in Scotland,  that were just delivered early February and are waiting to be installed. Once in production they will increase the yield to 30 gallons of moonshine and whisky from the current 5 gallons their stills now produce.

Here are some images I shot at the distillery. Most of these are HDR images. For you photo tech geeks, these are 5-image HDR shots, processed with Photoshop PS6 HDR Pro and Nik HDR Efex Pro. Enjoy and drink up! 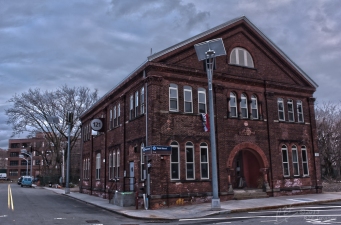 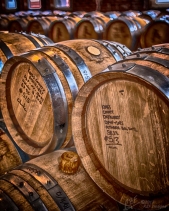 Close up of a 5-gallon barrel of aging bourbon

The finished and bottled product.

A little Whisky & Moonshine tasking after the facility tour. 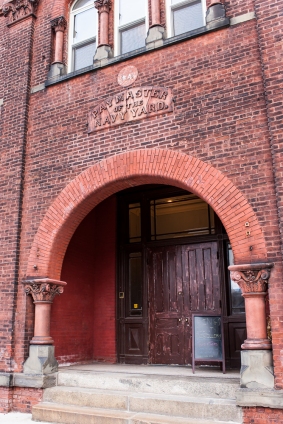 Building and crane in the Brooklyn Navy Yard

Please note all images are © 2013 RZF Images, all rights reserved. Images may not be reproduced or shared without permission of the photographer.